The first thing that you notice as you step in Cambodia is the open and warm smiles on the faces of the locals. No matter the time of the day or the state they are in, they welcome you with open arms. As I stepped down from my 13 hour plane ride at Siem Reap International Airport, my body was sore and my legs longed for some rest. However, rest was the last thing on my mind, I was in Cambodia, the Kingdom of Wonder and I was ready to commune with the Gods.  It was 5am on a rainy Friday morning and Souhav, the cab driver assigned to me at the airport was eager to show me what his country had to offer—nothing short of majestic.

‘Would you like to see the sunrise at Angkor Wat?,’ he asked in impeccable English; I of course said yes. From afar, I could only see the blurry outline of the famous temples of Angkor Wat but as we slowly inched forward through the throngs of tourists, the details became clearer, solidifying out of obscurity and clustering together like filings around a magnet.

Built by King Suryavarman II in the 12th century, Angkor Wat is the largest Hindu temple complex in the world and it is a miniature replica of the universe, based on Hindu mythology, set in stone. According to mythological beliefs, the mountain Meru is situated at the centre of the universe and the central tower at Angkor Wat is an earthly model of Meru. The five towers correspond to the peaks of Meru, the outer walls to the edge of the world and the surronding moat is a representation of the oceans beyond. A classical example of the architecture of the Khmer period and a stunning respresentation of the cosmic world, Angkor Wat is a UNESCO World Heritage site and for good reason. People from far and near come to this wondrous land, in hopes of finding a spiritual awakening which was in part the reason why I was there too.

The intricately designed Buddha statues and carvings at every turn in the complex could captivate the imagination for hours. ‘Some of the Buddha statues were decapitated and their heads sold for a fortune in other countries,’ Souhav explained with a solemn expression on his face. The centuries old Khmer architecture has withstood the test of time but unfortunately large portions of the complex were not able to withstand the violence that was rife during the tyrannical Khmer Rouge era. Vigilantly working day and night, with constant heartwarming smiles that never leave their faces, one feels a sense of awe, compassion and respect towards this magical land and its people. No matter the time of the day or the state they are in, they welcome you with open arms.

On previous visits, I had the opportunity to visit the famous landmarks and museums but this time, I was adamant to do something that I had never done before and that was to find out more about the people and their lifestyle. As a result when Souhav offered to drive me to the local woodwork shop, I jumped at the opportunity. For what better way to get to know people then to see them work. 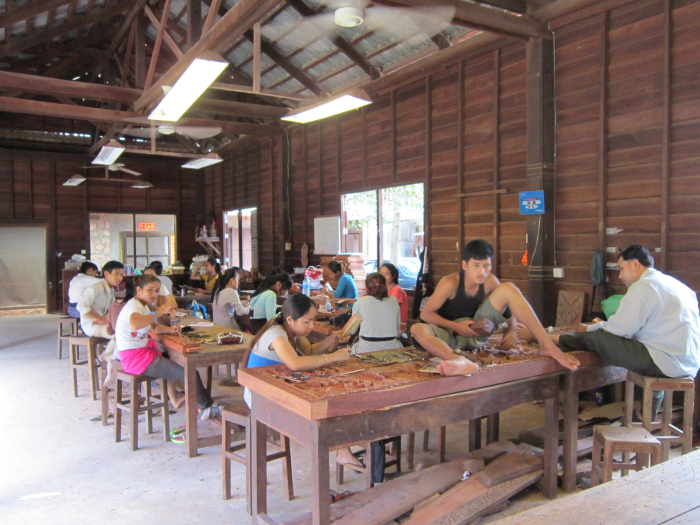 At the workshop, artisans were intently bent over, working away on their magnificent creations. For just a meager 50 cents an hour, they carved intricate pieces that would become centerpieces of a hotel lobby or a home in a far-flung location. ‘We make the best out of the work opportunities that we have’ one of the artisans explained in an ever so patient tone, ‘and this really is one of the better paying and stable jobs.’

After admiring the carvings for some time, we were on our way to a local diner that served steaming pots of delicious Khmer food, fresh, simple and fit for a king. We were served a mouthwatering three-course meal that included the world renowned Amok trey; freshwater fish fillet, covered in aromatic herbs and spices and served wrapped in a banana leaf. While I took my time to enjoy the delicious and generous offerings in front of me, my mind continued to wander and a question arose in my mind, ‘have I found what I came in search of?’

The answer was a simple, resounding and reassuring, yes. That night before I went to bed, I was thankful for this much-needed lesson in humility. I realized that the spiritual awakening many, myself included, seek in this transcendent mecca comes from not simply being in Cambodia but from being around its people who genuinely teach you to reconnect with your humanity. At the end of the day, self-awareness has to come from within but one has to realize that we are a part of something bigger.

This article originally appeared in the print edition of BOLD Magazine

View all posts by roastedkeyboard

One thought on “Cambodia: Spiritual Awakening and a Lesson in Humility in the Kingdom of Wonder”

Have Your Say! Cancel reply